At present, Coogan Accounts (a.k.a Blocked Trust Accounts and Trust Accounts) are required by the State of California, New York, Louisiana and New Mexico. In most instances, you will have to supply proof of a trust account prior to receiving a work permit. 15% of the minor’s gross wages are required to be withheld by the employer and deposited into the Coogan account within 15 days of employment. The parent must supply the Coogan account number to the employer.

History of the Coogan Law

The Coogan Law is named for famous child actor Jackie Coogan. Coogan was discovered in 1919 by Charlie Chaplin and soon after cast in the comedian’s famous film, The Kid. Jackie-mania was in full force during the 1920s, spawning a wave of merchandise dedicated to his image. It wasn’t until his 21st birthday after the death of his father and the dwindling of his film career that Jackie realized he was left with none of the earnings he had work so hard for as a child. Under California law at the time, the earnings of the minor belonged solely to the parent.

Coogan eventually sued his mother and former manager for his earnings. As a result, in 1939, the Coogan Law was put into effect, presumably to protect future young actors from finding themselves in the same terrible situation that Jackie Coogan was left in. Unfortunately, the 1939 incarnation of the Coogan Law was flawed, leaving open various loopholes and necessitating long term, court sanctioned contracts for validation.

After many years of advocating for more protections for child actors, Screen Actors Guild Young Performers Committee, National Policy and Planning Department and other industry groups were successful in closing many of the loopholes that made the original Coogan Law ineffective. In January 1, 2000, changes in California law affirmed that earnings by minors in the entertainment industry are the property of the minor, not their parents. Since a minor cannot legally control their own money, California Law governs their earnings and creates a fiduciary relationship between the parent and the child. This change in California law also requires that 15% of all minors’ earnings must be set aside in a blocked trust account commonly known as a Coogan Account.

Jackie Coogan went on to recover a small portion of his earnings after battling his mother in court. He became well known on the small screen playing Uncle Fester on The Addams Family, and will always be remembered for the role his story played in protecting child actors from losing their earnings

Parents in CA are required to open a “Coogan” Account and must be opened with a CA bank. A Coogan Account is a special blocked trust fund account found at a bank, credit union or brokerage firm.

Parents in NY are required to open up an UTMA or UGMA compliant trust account. This account is similar to the “Coogan,” but does not differ regarding rules of withdrawal. The account may be opened with any bank, in any state, as long as it meets UTMA or UGMA requirements.

Please visit the Labor Department’s website in each state for more detailed information.

Not all banks offer Coogan Trust Accounts, and even some that do still have employees are not familiar with the term “Coogan Account”. Sometimes explaining that you are opening up a blocked trust account for your minor child will clear up confusion.

Below you will find a partial list of banks, credit unions and brokerage firms that offer Coogan/Trust Accounts.  These financial institutions each have different requirements for opening accounts. Some require a first paycheck to open the account, some a minimum deposit and the interest rates vary. It is important to compare financial institutions and find the best one for you and your child. 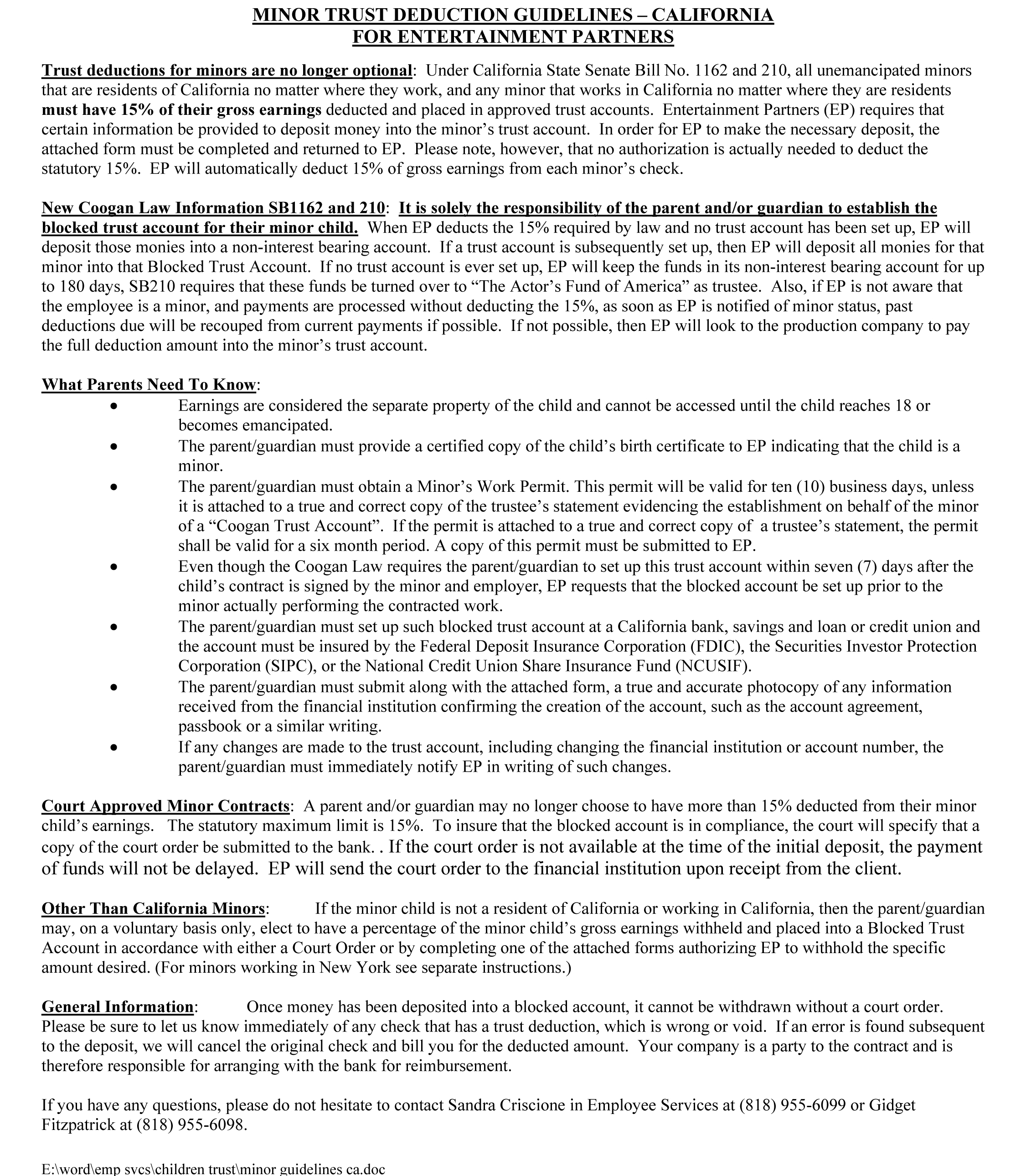